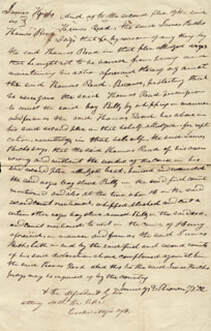 This extremely rare document is a deposition from a civil case regarding the beating of a slave. The plaintiff in this case gave testimony that he never gave the defendant permission to beat one of his slaves. A fascinating and harrowing look
into the world of slavery.

This document is a fascinating - and harrowing - look at slavery.

Read appears to have beaten a slave named Billy without the permission of his owner Keick. It's important to remember that slaves were considered to be property and not people. Even if Read was convicted of a crime, it probably would have been
trespass or damaging Keick's property and not assault.
© Homage Exhibit 2022
888-683-4386