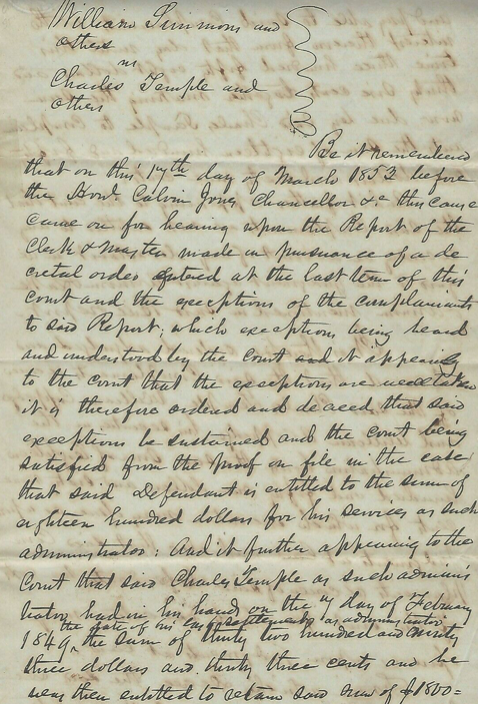 JUDGE CALVIN JONES was born in Person County, N. C. on July 8. He graduated from the University of North Carolina, and in 1831. In 1833, he began studying law, reading under Gov. Aaron V. Brown of Pulaski, Tenn.  Judge Jones moved to Somerville in 1837 and practiced law until 1847 when he was elected chancellor of the western division of Tennessee by the Legislature, and filled this office until 1854, when he resigned and resumed the practice of law at Somerville.

March 17, 1853, legal document involving William Simmons vs Charles Temple and decided by Judge Jones, who first finds that Temple, William Coppage and William A. Coppage owe Simmons $1,851.69 along with the “costs of this suit.”  While not stated specifically in the document, the case may have involved wages for the use of slaves.  Another case found in online research illustrates legal claims involving Coppage and slave ownership, making it clear that Coppage was very involved in southern plantations.

The document states, “From which decree the said defendants pray an appeal to the next term of the supreme court of the state of Tennessee…the defendants entering into bond & security before the clerk which is granted upon the defendants…[who] are allowed fifteen days within which time to give said bond….”

The verso reads, “Charles Temple…is under a $50,000 bond most of it secured by his slaves. The court feels this bond will cover adequately.”