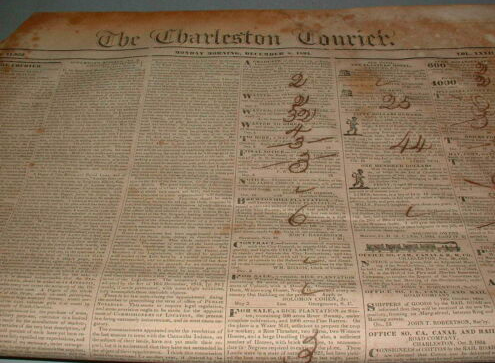 The Charleston Courier (Now The Charleston Post and Courier, founded in 1803 it brands itself as the oldest daily newspaper in the South and one of the oldest continuously operating newspapers in the United States.  This copy features editor's marks which were what the ad office used to show how many more times an ad would run.

Fugitive slave ads are an ironic source of details about the lives of slaves who might otherwise be lost to history. When slaves managed to escape their captors, slave owners would often publish ads in the classifieds sections of newspapers all throughout the country offering a reward for the runaway’s recapture and return. Even George Washington took out an advertisment to recapture one of his slaves. Ironically, these ads have become an important resource for historians trying to learn more about the lives of slaves who they would otherwise know nothing about.

Runaway Slave illustrated ad:  Negro man "Ben", 22-23 years old, scar on side of his face.  Writes with a tolerable hand and will try to pass himself off as a free man.  Ad placed by owner James Beal.