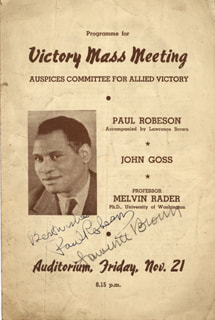 Robeson and his accompanying pianist Brown sign a program for their 1941 performance at the Victory Mass Meeting for the Committee of Allied Victory.

The program included baritone Paul Robeson, accompanied by pianist Lawrence Brown, John Gross, Chairman of Committee for Allied Victory, who was also a baritone, and Professor Melvin Rader, lecturer on Philosophy and political science, University of Washington. Rader was the author of No Compromise, "a trenchant exposure of the
evils of Fascism". The gala concert was sponsored by the Committee for Medical Aid to the Soviet Union, under the auspices of the Canadian Red Cross Society, Vancouver Branch.

Singer, actor and athlete PAUL ROBESON (1898-1976) began his ties with the Soviet Union in 1934, when filmmaker Sergei Eisenstein invited him to Russia. Robeson was impressed with the country's equal treatment of the races and made a number of trips to the U.S.S.R., including opening 1959 with a Kremlin gala hosted by Nikita Khrushchev. His Soviet sympathies led to his being put under surveillance by the FBI in 1941 and put on the 1947 "black list" of suspected
Communists, a charge that was later refuted.

Robeson, the son of a former slave and an All-America football player at Rutgers (1917, 1918), starred on Broadway in
Show Boat in 1926, introducing "Ol Man River", a song written for him by Jerome Kern. Praised as an "eloquent, impressive, and convincing" actor, Robeson had previously been tapped by playwright Eugene O'Neill to star in a revival of his The
Emperor Jones (1924). He later premiered in O'Neill's All God's Chillun Got Wings.  Robeson's commanding presence and resonant bass voice were equally impressive in his efforts to urge Blacks to embrace their African heritage. Pianist LAWRENCE BROWN (1892-1972), Robeson's longtime accompanist, toured, recorded and appeared in two films (Jericho and Big Fella, both 1937) with Robeson.
© Homage Exhibit 2022
888-683-4386