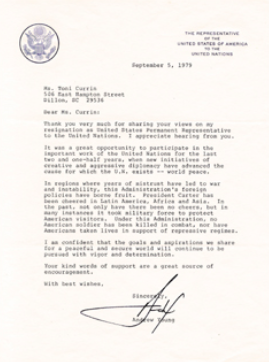 Andrew Young Letter in Defense of the Carter Administration
​September 5, ​1979

Following his resignation as US Ambassador to the UN, Young offers a vigorous defense of the Carter administration's foreign policy.

On his "The Representative of the United States of America to the United Nations" letterhead to Ms. Toni Currin, Dillon, SC. In full:

"Thank you very much for sharing your views on my resignation as United States Permanent Representative to the
United Nations. I appreciate hearing from you. It was a great opportunity to participate in the important work of the United Nations for the last two and one-half years, when new initiatives of creative and expressive diplomacy have advanced the cause for which the U.N. exists -- world peace. In regions where years of mistrust have led to war and instability, this Administration's foreign policies have borne fruit. President Carter has been cheered in Latin America, Africa and Asia. In the past, not only have there been no cheers, but in many instances it took military force to protect American visitors.

Under this Administration, no American soldier has been killed in combat, nor have Americans taken lives in support of repressive regimes. I am confident that the goalsmand aspirations we share for a peaceful and secure world will continue to be pursued with vigor and determination. Your kind words of support are a great source of encouragement."

Andrew Young, who had been elected U.S. Congressman from Georgia in 1972, 1974 and 1976, was an early supporter of Jimmy Carter in his 1976 bid for the presidency. After Carter won, he appointed Young as U.S. Ambassador to the U.N., but Young, who was controversial for his apparent sympathy for the Third World, was forced to resign in 1979 after it was revealed that he had met with a representative of the Palestine Liberation Organization.
© Homage Exhibit 2022
888-683-4386