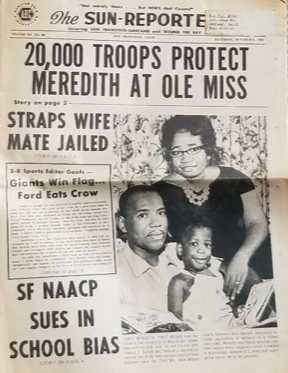 With the massive migration of blacks in the 1930 and 40's to the San Francisco Bay Area to work in the wartime shipyards, the sudden change in population made it clear that if blacks were to have a voice they had to have a newspaper, and the Sun-Reporter became that paper. First came The Reporter in 1944, founded and edited by Thomas C. Fleming, which soon merged with The Sun, a paper acquired in a poker game by Dr. Carlton B. Goodlett, Fleming's longtime friend; and thus the Sun-Reporter was launched, with Goodlett as Editor/Publisher, Dr. Dan Collins as Co-Publisher, and Fleming as Managing Editor. In 1951 Goodlett became sole publisher, and in 1971 Dr. Goodlett added the seven Metro-Reporters and the California Voice to his publications.
​
Dr. Goodlett capitalized on his early interest in journalism (as editor of the Hilltop, Howard University's student newspaper) by becoming publisher of The Sun-Reporter, a fighting, crusading newspaper designed to take on all the social and political battles raging in post-war America and proudly carrying the motto, ”That no good cause shall lack a champion, and that evil shall not thrive unopposed."

From its inception, and it holds true today, the Sun-Reporter has taken a strong editorial stand against racism, segregation, war and inequality while actively fighting for civil rights, fair employment and housing laws, and world peace; early on, it challenged school segregation; it denounced Senator Joseph McCarthy's assault on civil liberties in the days of the Cold War.

In the 1960's The Sun-Reporter building, with its upstairs Community Room, became a focal point for the community. Many events took place there, including  visits from Malcolm X, Muhammad Ali, Dick Gregory, and the Black Panthers. Some young and talented journalists started their careers at the Sun-Reporter and moved on, including Lance Gilmore, Edith Austin, Belva Davis, Valerie Coleman and many more. Phil Burton, Art Agnos, Jerry Brown, Willie Brown, George Moscone, Cecil Poole, Ron Dellums, Barbara Lee, Mervyn Dymally, Aileen Hernandez, Dolores Huerta and many other prominent political figures dropped by the Sun-Reporter for advice and counsel.