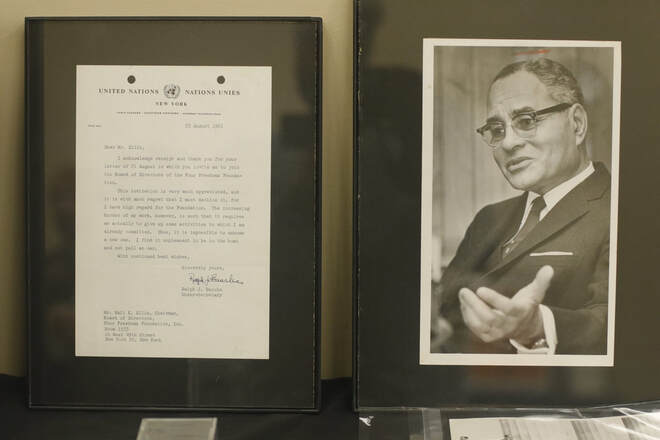 Ralph J. Bunche sends a typed letter of regret that he is not able to join a board.

"I acknowledge receipt and thank you for your letter of 21 August in which you invite me to join the Board of Directors of the Four Freedoms Foundation. This invitation is very much appreciated, and it is with much regret that I must decline it, for I have high regard for the Foundation. The increasing burden of my work, however, is such that it requires me actually to give up some activities to which I am already committed. Thus, it is impossible to assume a new one. I find it unpleasant to be in the boat and not pull an oar. With continued best wishes, Sincerely yours,"

Ralph J. Bunche, (1904-1971) who joined the United Nations in 1946, was chief U.N. mediator in the Middle East in 1948 and was awarded the 1950 Nobel Peace Prize for helping to negotiate a truce between the Arabs and Israelis the previous year.