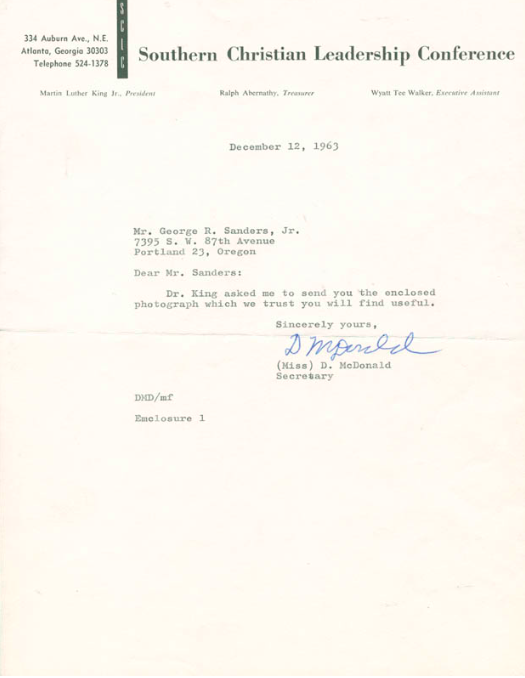 The personal secretary of Martin Luther King Jr. types this letter to George R. Sanders in response to his request for a photo
Typed Letter signed: To "Dear Mr. Sanders". In full:

"Dr. King asked me to send you the enclosed photograph which we trust you will find useful/ Sincerely yours". Dora Edith McDonald (1925-2007) first worked as a secretary for Benjamin Mays during his time as the president of Morehouse College. Then, in 1960, she began working for Dr. King. She not only was responsible for arranging public appearances and typing up Dr. King's sermons, speeches, and letters of correspondence, but she also often traveled with the civil rights leader and eventually became quite close with members of the King family.

McDonald worked for King until his assassination, and was the one to inform Coretta Scott King of her husband's untimely death. Throughout the 1970s she worked for politician Andrew Young, and in later years she was a part- time assistant to Mrs. King. In 2007 her memoir, Sharing the Dream: Martin Luther King, Jr., the Movement, and Me, was published.