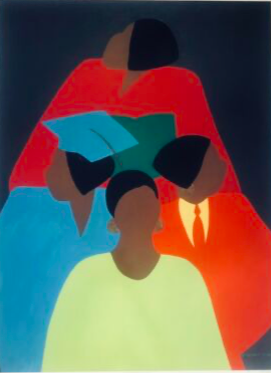 James' career as an artist began in 1969 when she sold a painting in New York City to one of her co-workers. She continued to work in corporate America in the accounting department, only painting in her spare time. In 1984, she developed her unique style of painting human figures without facial features. She has completed more than forty commissioned works for individuals and organizations such as Mridgitte Matteuzzi’s School of Modern Jazz Ballet, The Los Angeles Women’s Foundation, Essence Magazine and attorney Johnnie Cochran. In addition, her artwork has appeared on the covers of numerous books, including works by Alice Walker, Terry McMillan and Julia Boyd. In 1997, James was chosen by the United States Postal Service to create the first Kwanzaa stamp.

James has written more than a dozen children’s books, she is the author of two books of poetry and prose, entitled Girlfriends and Can I Touch You: Love Poems and Affirmations and wrote a multi-cultural cookbook Creative Fixings From the Kitchen. James’ pieces have been featured in galleries around the globe, including exhibitions at the Musée Des Duncans, The Chicago Art Institute and Cosmopolitan Artists. She has received numerous awards, including a 1997 Coretta Scott King Honor and a Parent’s Choice Silver Honor for her children’s book Sunday.
© Homage Exhibit 2022
888-683-4386