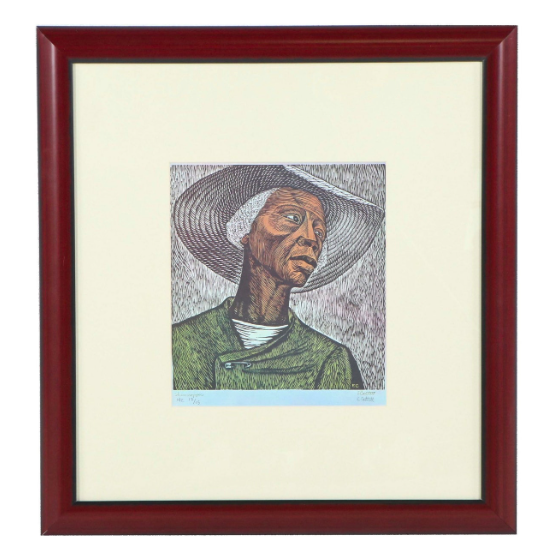 Sharecropper Offset Lithograph on paper
Signed in pencil to the lower right,
Edition HC 13 out of 15

​Catlett once said that the purpose of her work was to “present black people in their beauty and dignity for ourselves and others to understand and enjoy.” Sharecropper calls attention to the tribulations of tenant farming—a system in which rent for the land is paid by the farmer with a part of the crop, creating an impossible-to-escape cycle of debt—while also offering a heroic portrait of an anonymous woman.
​
As a sculptor and printmaker, Catlett blended figurative and abstract traditions with social concerns and maintained a deep belief in the democratic power of printed art to reach a large audience. Her printmaking practice included woodcut, screenprint, lithography, and, most importantly, linoleum cut, which she learned at the Taller de Gráfica Popular (People’s Graphic Workshop) in Mexico City. Founded in 1937, the workshop aimed to continue the Mexican tradition of socially engaged public art. It specialized in linoleum cut, a technique that produces inexpensive prints and can accommodate large editions. Catlett first visited this renowned workshop and artists’ collective while she was in Mexico on a fellowship in 1946, where she found a kinship with the Mexican muralists, including Diego Rivera and José Clemente Orozco. Like them she tried, she explained, to make art “for the people, for the struggling people, to whom only realism is meaningful.”