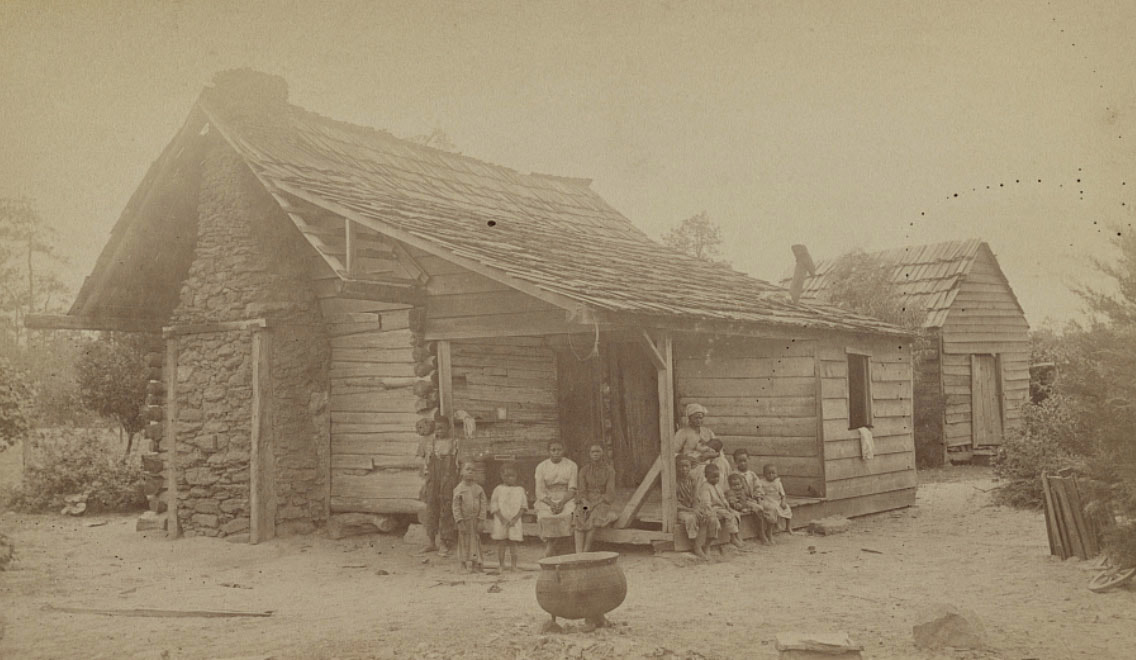 This 1874 photo shows a large African American family of mostly women and children, gathered around the porch of a log and clapboard cabin, with wood shingle roof and stone chimney, and a large cauldron in the foreground, and with a small shed in the background.

Palmer was born in Ireland and moved with his family to the US as a child.  Palmer specialized in photographs of the African-American community. He took family and personal portraits as well as images of their homes and scenes from cotton fields and other locations where they worked. Palmer's stereographs of the lives of African-Americans at work are important as they provide important information about how both white South Carolinians and African-Americans adjusted to the new reality. In 1864, he advertised this collection as illustrative of "Southern plantation life" in The Philadelphia Photographer.

In 1866, Palmer moved to Savannah, Georgia where he worked as a photographer. He moved to Aiken in 1870. He was a prolific photographer at a time when the technology was still in its infancy. Palmer's continuous documentation of the lives of African-Americans before and during the Reconstruction Era (1865–1877) placed him in a rarefied company.  At that time, African Americans who were freed from slavery due to the Emancipation Proclamation (1863) or who had been soldiers fighting for their freedom during the Civil War tried to assimilate into a society that did not welcome them. Schools and churches were established to provided a means to gain education by people of all ages and establish places of worship. During this period, citizenship of African-Americans was to be resolved, but they had the right to vote, purchase property, and gain employment.
© Homage Exhibit 2022
888-683-4386